Spring Bells Ring to Welcome Royals Back to Dunedin 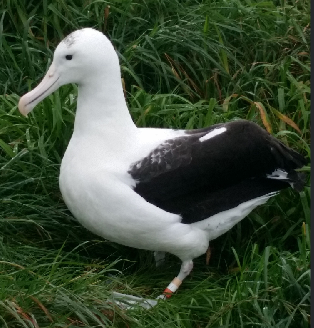 Dunedin’s bells will be ringing tomorrow to celebrate the first Royal Albatross to return for the Spring breeding season at Taiaroa Head.

In a long held tradition Dunedin’s churches, schools and public buildings will be pealing their bells across the city at 1pm Tuesday 19th September

Otago Peninsula Trust Marketing Manager, Sophie Barker says “As well as the traditional bells a “Welcome back” flag will fly outside the Mayors’ office and fans are setting bell chimes on their mobile phones to ring at 1pm. Dunedin hosts the world’s only mainland Royal Albatross Breeding colony which is a source of great pride and a symbol of the city – the Wildlife Capital of New Zealand. We hope that celebrating the return of the albatross and the anticipation of a new breeding season will be good therapy as we prepare to say goodbye to Tūmanako the Royalcam albatross chick and his 22 fledgling cohorts, one of whom fledged last week.”

First bird back this season is Yellow White Orange (recorded as YWO) arrived 18 September. YWO was hatched in 1987 and is a 29 year old female who first returned back to Pukekura/Taiaroa Head in 1992 aged  5 (i.e. 5 years at sea following fledging) . Her mate is GBO and she bred for many years, however it’s believed she is now single.

YWK and KGY  the parents of Moana, the first Royalcam chick from 2016 are expected back this season to breed again as is Buttons (Blue, Orange, Red hatched 1989 /BOR); Grandma’s last chick, father of 500th chick Toroa.

DOC Ranger Jim Watts says ”September is an exciting time of year for us as we say farewell to the fledging chicks as they take their first flight out to sea and also welcome back the returning birds for the upcoming breeding season. There is always a bit of anticipation to see who is the first to return, who returns to breed, will there be any first time breeders and most exciting is finding out who returns for the first time since fledging many years prior.”

Royal Albatross Centre Manager Hoani Langsbury says “This is a wonderful time to visit the colony. Viewing is great as albatross renew their pair bonds with grooming and flying displays while also choosing a place to nest.  We still have quite a number of chicks on view who are entertaining visitors with their wing exercises as they get ready to fledge. The adolescents will be in party mode, doing what teenagers do, impressing prospective mates, building pair bonds and showing off; this leads to impressive flying displays and ground parties (gamming).”

The 2016/17 breeding season has been a very successful season with 23 chicks raised. The colony is home to over 250 albatross who, once mature, breed every two years. 151 albatross returned in the 2016/17 season, a record 17 were returning for the first time. There were 36 nests with eggs and 25 chicks hatched.

Check out our daily tours to the Albatross Centre (click here)